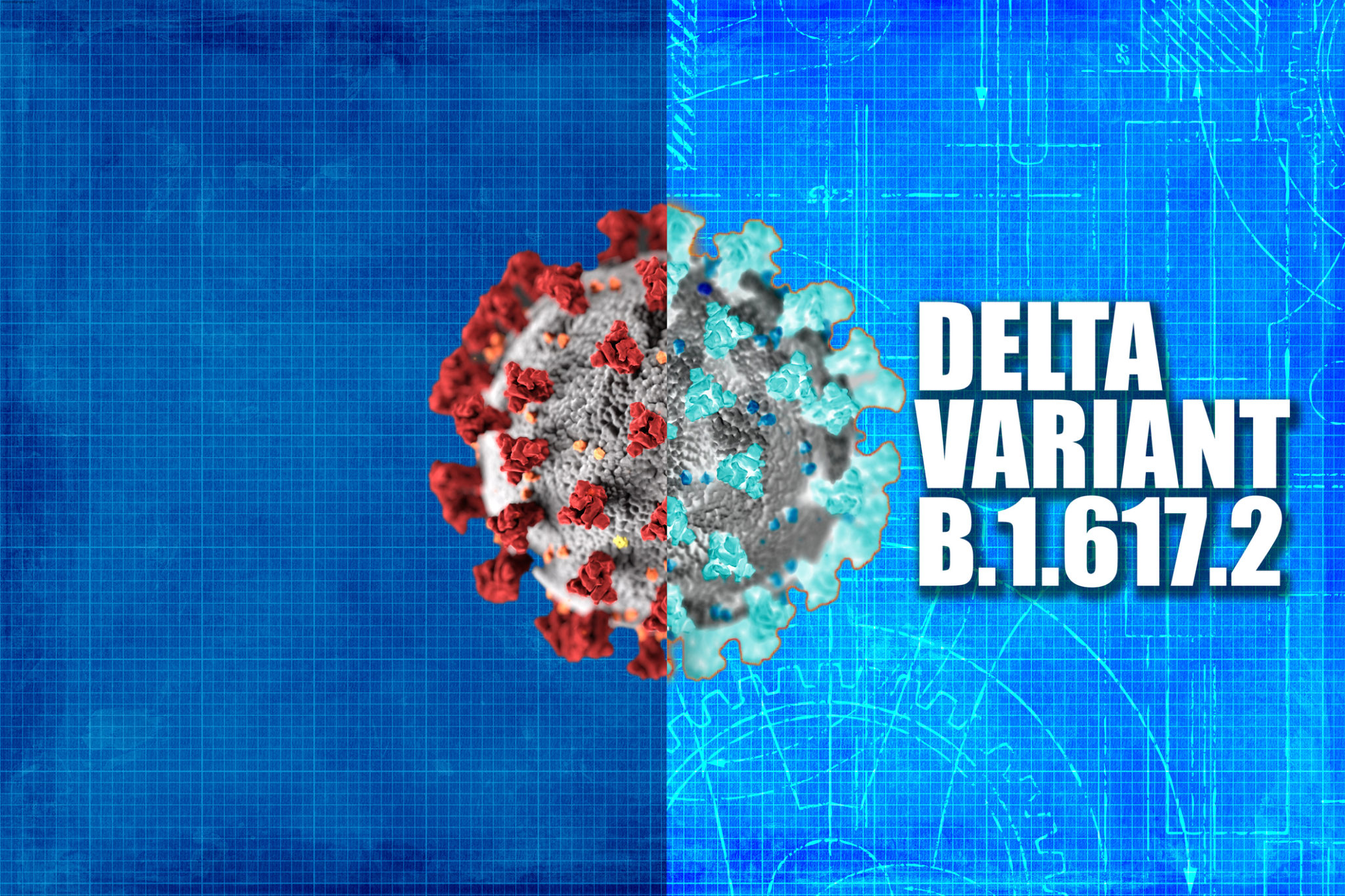 For a little while this summer it was looking as though we might be able to put most of the problems associated with the COVID-19 pandemic behind us. The vaccines were working great and even those who hadn’t been vaccinated were developing good levels of natural immunity following infection.  Then came the “Delta Variant”, which started taking over as the most prominent variant around the world due to its ability to spread two or three times faster and cause infection much more quickly with a viral load that is 1000x higher than those infected with the original coronavirus strain (Link). Researchers report that a viral infection is first detectable in people with the Delta Variant four days after exposure, compared with an average of six days among people with the original strain. When the pandemic began, people spread the original coronavirus to an average of two or three people. Today, people infected with delta infect six people, on average (Link).

What’s even worse is that natural immunity doesn’t seem to be nearly as helpful against the Delta Variant as it is against the original strain of COVID-19.  Consider, for example, a paper published by the journal Nature (Planas, et. al., June 29, 2021) as well as a discussion of this interesting paper by pulmonologist Dr. Roger Seheult in the following video:
In particular, look at page 7 of the paper as Dr. Seheult discusses the key findings of this paper.  Note that antibodies in those who had a prior infection to COVID-19, and thus have “natural immunity” were not very effective when it came to neutralizing the Delta Variant in particular.  However, after just one dose of a vaccine against COVID-19, those with natural immunity did gain good levels of neutralizing antibodies against the Delta Variant.  Compare this with those who never had a prior infection who were fully vaccinated (with two doses) with the vaccines. These fully vaccinated people had much better levels of neutralizing antibodies against the delta variant as compared to those who only had prior natural immunity, but no vaccination.
Note also another paper published in the journal Cell (Liu, et. al., June 16, 2021).  In this paper, the authors note that the natural immunity varies against the delta variant based on what strain of COVID-19 a person was originally infected. For example, if a person was originally infected by the beta or gamma variant of COVID-19, that person would have “markedly reduced neutralization” capabilities against the delta variant – according to these authors. Whereas “vaccines based on B.1.1.7 [the alpha variant] may protect broadly against current variants.”
However, there’s another recent paper where the authors conclude that “getting a third dose” of the mRNA vaccines would only increase the quantity, but not the quality, of antibodies – without improving the ability of the antibodies to neutralize new variants (Cho, et. al., July 29, 2021).  The authors specifically argue that:

“These results suggest that boosting vaccinated individuals with currently available mRNA vaccines would produce a quantitative increase in plasma neutralizing activity but not the qualitative advantage against variants obtained by vaccinating convalescent individuals.”

Of course, this only makes sense given what is currently known.  Given all of the data that is currently in hand, it is very reasonable to conclude that those who have pre-existing natural immunity, due to a previous infection by COVID-19, would end up with superior neutralizing advantages against variants if they were to receive a vaccine against COVID-19.  The combination of natural immunity plus a vaccine, such as one of the mRNA vaccines, would end up producing a better wider range of immunity compared to the immunity of those who are vaccinated, but have no additional “natural immunity”. In fact, this conclusion is supported by the findings published by Planas et. al. in Nature. Those with natural immunity, who were then given a vaccine, ended up with superior activity against the Delta Variant – as compared to those who were only fully vaccinated, but were never infected by the live virus.
The problem, of course, is the risk associated with the natural COVID-19 infection.  The risk of infection is far far higher than the risk of the vaccine – which is, of course, the whole point of vaccines.  The whole purpose of vaccines is to gain a useful level of immunity without having the body experience the natural infection and all the risks associated with it.  After all, the risks associated with the vaccine, and there are a few, are very rare relative to the risks associated with the natural infection.
So, that’s why I chose to get vaccinated – to protect myself and those around me with the least risk to myself and to my neighbors as is currently possible.  It’s also why I see no point in getting a third vaccine (a booster shot if you will) unless the booster specifically targets the most risky variants – as recommended by Cho et. al.
For further information on this topic, see also a very good review article:

Delta variant makes it even more important to get a COVID-19 vaccine, even if you’ve already had the coronavirus

But what about the evidence that even those who are vaccinated still get infected by COVID-19? – particularly the Delta Variant?  As an example of this, consider a series of large public events that occurred over several days in Cape Cod, Massachusetts (from July 3–17). This “event” or “series of events” if you prefer, resulted in 469 people being infected with Covid-19 (as initially reported by the CDC). Of this number, 346 (74%) occurred in fully vaccinated persons!

That sounds like a problem until one realizes that 72% of the population in Massachusetts has received at least one vaccine dose, and, overall, 4,389,137 people or 63% of Massachusetts’s population has been fully vaccinated. Of those 75 years of age and older, the rate of full vaccination is 81.7% and for those 50-74 years of age, the rate of full vaccination in this state is over 80%. And, the vaccine rate is even high for those who are in the 20s, 30s, and 40s in this region (Link). Only the children have a low rate of vaccination because the vaccines are not available to children yet. And, those attending these large events were supposed to be vaccinated.

Clearly, then, as in the UK, the significant majority of those older than 30 years of age have been fully vaccinated. So, it only stands to reason that the majority of infections, and even deaths, would be among those who have been vaccinated since the effectiveness of the vaccines is not 100%. It’s very good, but not 100%. When it comes to the original type of COVID-19, vaccines not only provide significant protection against hospitalization and death, but also significantly reduce the transmission rate of the virus to others.

What is different, then, about this Massachusetts data, is that the Delta Variant seems to have a much higher infection rate, even among those who have been vaccinated, as compared to the original COVID-19 virus of 2020. Just watch Dr. Roger Seheult’s video (linked above), where he explains that the only group of people that has a decreased risk of severe infection requiring hospitalization and/or death from the Delta Variant is not the unvaccinated group, or even the partially vaccinated group, but the fully vaccinated group (within a particular age category).

Again, when it comes to the severity of illness and deaths, all of the data worldwide, the UK data included, strongly supports the conclusion that the unvaccinated, within a particular age category, are at a far far higher risk of hospitalization and death from COVID-19 infections (particularly the Delta Variant now) as compared to those who are fully vaccinated against COVID-19 – via the mRNA vaccines in particular. More than 99% of those who are dying of COVID-19 right now, within a particular age category, are the unvaccinated – in this country and around the world (Link, Link).

Many conspiracy theorists (like Dr. Mercola for example) are misinterpreting the data coming from the UK (what’s new). Sure, more vaccinated people are dying in the UK compared to unvaccinated. However, the risk of hospitalization and death is much higher in the unvaccinated. How can that be?

The risk of dying from COVID doubles roughly every seven years older a patient is. The 35-year difference between a 35-year-old and a 70-year-old means the risk of death between the two patients has doubled five times – equivalently it has increased by a factor of 32. An unvaccinated 70-year-old might be 32 times more likely to die of COVID than an unvaccinated 35-year-old. This dramatic variation of the risk profile with age means that even excellent vaccines don’t reduce the risk of death for older people to below the risk for some younger demographics.

PHE data suggests that being double vaccinated reduces the risk of being hospitalized with the now-dominant delta variant by around 96%. Even conservatively assuming the vaccines are no more effective at preventing death than hospitalization (actually they are likely to be more effective at preventing death) this means the risk of death for double vaccinated people has been cut to less than one-twentieth of the value for unvaccinated people with the same underlying risk profile.

However, the 20-fold decrease in risk afforded by the vaccine isn’t enough to offset the 32-fold increase in the underlying risk of death of a 70-year-old over a 35-year-old. Given the same risk of infection, we would still expect to see more double-vaccinated 70-year-olds die from COVID than unvaccinated 35-year-olds. There are caveats to that simple calculation. The risk of infection is not the same for all age groups. Currently, infections are highest in the youngest and lower in older age groups (Link).

Light at the end of the tunnel:

Fortunately, there does seem to be some additional light at the end of the tunnel – coming more quickly than many expect perhaps.  It turns out that the Delta Variant hit England and some other European countries before it really started going in the United States.  And, since the older communities in these countries had already been heavily vaccinated, the Delta Variant primarily spread and affected younger unvaccinated portions of these populations. And, since younger people are less susceptible to severe infections resulting in hospitalization and/or death, they were better able to tolerate the Delta Variant despite its very rapid spread.  Additional natural immunity was gained to the Delta Variant very rapidly and, combined with the already-existing immunity gained from the vaccinated community, the Delta Variant suddenly started to die out in these regions – which is very encouraging when it comes to ideas of repeated government lockdowns and the resulting severe damage to economies that happened the last time…
.
In this line, I would recommend an interesting review of the Delta Variant by Dr. Zubin Damania:

4 thoughts on “Natural Immunity vs. Vaccines vs. the Delta Variant”